Akame vs Tanjiro is JohnGojira's 25th DBx. It is the 13th episode of JohnGojira's Season 2, along with the Season Finale.

Akame Ga Kill vs Demon Slayer! Tanjiro is brought to the Capital to slay a demon, but finds another challenge when Akame is to take down a certain target.

It was now night time. Tanjiro Kamado had been delivered a mission in the Capital of the Empire by his Kasugai Crow, Matsuemon Tennoji. With the sun down, Tanjiro let his little sister, Nezuko, out of the carrying box, for since she was a demon, it was safe for her. The busy streets of the capital had carts moving around, and vendors welcomed visitors.

From a rooftop above, a figure watched the brother an sister, before disappearing out of view.

Then, he caught it... the scent of the demon he was to slay here.

“There's the scent of the demon. Lets go, Nezuko,” Tanjiro said with some concern, for he wanted to make sure that no one would be harmed. He and his sister rushed through some the crowds, accidentally bumping into some people, exhibiting disgruntled murmurs from people.

“I'm so sorry,” Tanjiro said as he passed them. while he did not want to be rude, he had to make haste. The scent of the demon grew thicker as he came towards the outskirts of the Capital. Then, the scent became intermingled with blood. A shrieking echoed behind some of the buildings on the edge of the city, before Tanjiro reached the woods surrounding it.

He stopped with Nezuko, seeing a strange sight.

The demon was killed, and its killer stood not far. She was a girl dressed in dark clothes, with a red tie, and she had black hair... It was Akame. She looked up at Tanjiro and Nezuko.

Akame did not respond, merely giving a look that showed no emotion.

“Not the target... ignore,” the Night Raid assassin said, before dashing forwards. Tanjiro realized at that moment that she was attacking his sister, Nezuko. Tanjiro drew his sword, blocking Akame's Murasame before she could reach Nezuko.

“Why are you attacking my sister?” Tanjiro said with concern for his sister and building anger towards Akame.

“She is a demon, potentially dangerous towards the public,” Akame said. “She is my target.”

“But Nezuko is not dangerous,” Tanjiro insisted., However, Akame was not convinced, and attempted to push Murasame forwards, but Tanjiro pushed back, and their blades clashed.

"Do not make me kill you as well," Akame said.

“I don't care what your trying to do, I won't let you or anyone hurt my sister!” Tanjiro said.

Akame leapt back, and wielded the Cursed Blade Murasame in front of her, and Tanjiro held out his Katana, the two ready for battle.

Akame dashed towards Tanjiro, Murasame at the ready, and Tanjiro dashed forwards as well. They clashed swords, each sword blow blocked by the other's.

Then, the two leapt back, before they charging through the forest, preparing for another clash. Akame watched Tanjiro with a cold glare, and Tanjiro watched her with anger as his expression, for he wanted to protect his little sister.

Suddenly, Akame burst into the distance, and out of sight.

“Man, she's fast,” Tanjiro said with concern, looking around. His gaze darted through the trees, but he could not spot the wielder of Murasame. Then, the demon Slayer caught the scent of a person, coming from not far away. He knew tthat must be Akame. And sure enough, he soon saw the assassin coming at him at high speeds.

"There she is," Tanjiro said.

Tanjiro readied his sword, and water was around him.

Akame saw a stream of water slice through the air towards her. She leapt upwards to dodge Tanjiro's attack, just avoiding it.

She landed a blow to Tanjiro's chest, sending the demon slayer skidding back across the ground. Tanjiro looked up to see Akame coming for another attack, Murasame positioned to stab. However, Tanjiro just managed to dodge as the Night Raid assassin attempted to stab him with the One-Cut Killer.

The fleet footed Wielder of the Demon Blade darted across the branches. Tanjiro saw this, and developed a strategy to counter. As he dashed in pursuit of Akame, a blue dragon that appeared to be made of water formed beside him.

"Water breathing Technique, Tenth Form - Constant Flux!" the demon slayer said, slicing across the trees, which were thin enough to be cut. Streams of water flowed across the undergrowth, and the trees began to fall.

Akame was caught by the falling trees, and she fell to the forest floor amongst them.

Tanjiro looked back to find Akame lying on top of the fallen trees.

"Did that stop her?" Tanjiro asked himself. But his question was answered when Akame leapt back up in the air, and she stared him down.

"She resisted the fall?" Tanjiro said in shock. "She must have great durability."

Then, Akame abruptly sliced her arm with Murasame, alowing the poison to enter her. With that, her schleras turned black, her pupils gained black markings, and a dark aura formed around her as she called upon her Teigu's Trump Card, Little War Horn. Red markings also became apparent on her skin. Tanjiro felt a chill run down his spine.

"What is that?" Tanjiro said.

"Eliminate," she said, a cold glare on her face.

Akame sprinted towards Tanjiro, and Tanjiro only barely had time to block. The slashes of the Demon Sword battered against Tanjiro's own sword, who was forced into a block.

"Man, she seems to be almost a completely different fighter," Tanjiro said in his head. "Her attacks and movement are faster and far more forceful than before. I'd better be careful."

The Demon Slayer attempted to hold back the attacks, for he had no other means of combating. The force of Akame's slashes forced Tanjiro to step back.

Then, Akame forced Tanjiro's bladed back, before kicking him in the chest, sending him back into a tree.

Tanjiro slammed into the base of the tree, feeling the pounding feeling on his back upon collision.

However, as Tanjiro saw Akame coming towards him at high speeds, he remembered the dance his Father had taught him.

Preparing his sword for an attack, he brought it up in preparation to fight back. Steam then seemed to come out of his mouth, and the bluish water dragon turned a brilliant red, burning with fire.

The Demon Slayer came at the Demon Sword wielder, his blade now glowing a fiery color as well.

As Akame prepared to slashe, she was caught by surprise by the new attack. Tanjiro's blade sliced straight through Murassame, and the Cursed Sword shattered, it shards falling to the ground.

"How?" Akame said in shock. She did not give up, and attempted to stab Tanjiro with wjat remaind of Murasame. However, Tanjiro turned around, before striking once again with his flaming blade, slicing through Akame's arms. Akame cried out in pain as her arm were stubbs, and her hands fell to the ground.

Akame stood there, with no means to fight back.

But Tanjiro put his Katana back in its sheath.

"You battle technique, is excellent," Tanjiro said to Akame.

Then, she seemed confused.

"Because you are like me, one who fights to help others," Tanjiro said assuringly. "I could not trample your pain, or take your life with that in mind."

A short bit later, the sun began to rise. Tanjiro met back with his sister, and she was safely back inside the carrying box. Tanjiro accompanied Akame back to Night Raid's base to insure that she arrived back to avoid blood loss and get suitable care, and her wounds were tended for. Shortly after, Tanjiro head off on his way.

"Farewell," Akame said with a smile.

"Farewell," Tanjiro said with a smile and closed eyes, waving as he head back along the path. 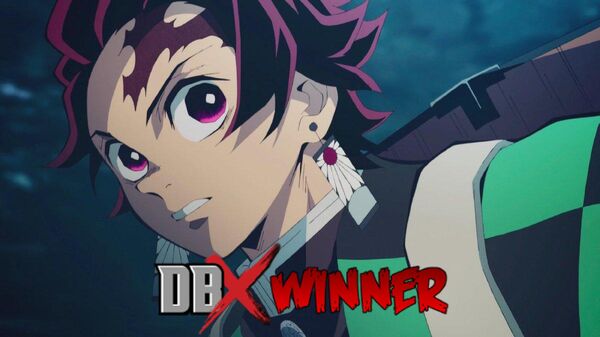 Six monsters of the deep...

Will be in battle in the abyss...

Which ones will be in deep water and which one will win, in...

Retrieved from "https://dbxfanon.fandom.com/wiki/Akame_vs_Tanjiro?oldid=186682"
Community content is available under CC-BY-SA unless otherwise noted.