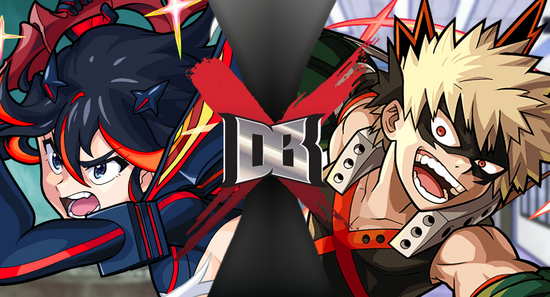 Ryuko Matoi vs Katsuki Bakugo is the second DBX in Irish VS Writer's resurrection season.

Resurrection Season 1 Episode 2! Kill la Kill vs My Hero Academia! Blade meets Explosions as these angry dilinquents attack. Blood and ashes will cover the battlefield...but who will these belong to?

The streets of Toyo were remarkably quiet as opposed to its usual bustling nature, But now it was practically a ghost town. The long stretches of silence were interrupted by a blaring siren exclaiming a warning to an empty audience: "A VILLAIN HAS ATTACKED THE NORTH OF THE CITY. ALL CIVILLIANS MUST EVACUATE THE AREA IMMEDIATLY" despite this screaming warning, a red motorcycle flew down the road at top speed, dust trailing behind the hind wheels. The rider's short black hair with red tipping blew in the wind due to the sheer speed of her vehicle.

The rider of this vehicle appeared to be a short and skinny teenage girl dressed in a black school uniform with one big difference: It appeared to have a what looked like a large eye coloured red, yellow and orange. Her hand which gripped the bike's handle tightly was covered by a red glove. This was Ryuko Matoi and the very clothes she was wearing is her partner in battle, Senketsu. "You'd think for such a big-ass villain it'd be easy to find!" Ryuko growled as she slowed down her bike just enough to look around the area for clues."Ryuko, I doubt it would be so easy to find a villain in such a large ci--

Senketsu was suddenly interrupted by the sound of a powerful explosion which left a large mushroom cloud as an aftermath. "You were saying?" Ryuko snarkily asked with a grin on her face. "I apologise..." Senketsu responded as Ryuko put the peddle to the metal once again, Now knowing where she was going...

Eventually Ryuko had arrived to the scene. She stepped off the bike and turned it off stopping the rumbling noise from its engine. Matoi cracked her neck as she looked around the area and only saw that the ground had been singed from the previous explosion. "Where the hell did that asshole go?" Ryuko questioned with gritted teeth, "They were clearly here before...but where could they have gone in such a short amount of time?" Senketsu questioned as Ryuko checked the nearby business' only to find a thug lying knocked out in the middle of a wrecked sport shop.

Ryuko's attention was suddenly drawn to the sound of metal smashing, She turned around to see the cause of this sound: A thug that had crashed into her bike at the speed of a car, causing her vehicle to completely cave in on itself, smoke burrowed from the point of impact. "MY BIKE!" Ryuko exclaimed with anger as she looked for what...or whom had slammed this unfortunate soul into her precious bike.

The cause didn't take too long to find for Ryuko, as about 20 feet away stood a large wall of dust and smoke which made the entire street hard to see. But despite the poor visibility, Ryuko could still see a dark silohutte along with the sound of heavy footsteps echoed across the entire street. With each passing step the figure became more visible until his features were clear to Ryuko.

He wore a black costume which was designed with a large orange x on his chest, On his hands he wore large grenades and he had a small black mask over his eyes to top off his superhero costume. He had blonde spiky hair which matched his aggressive and explosive personality. "Are you extra's done already!?" He taunted to the fallen man, This was the overly aggressive hero in training: Katsuki Bakugo otherwise known as Dynamite.

"You had so much talk before so why have you bitched out already!?" Bakugo yelled in anger as he stepped closer and closer. "Oi you!" Ryuko growled which stole Bakugo's attention. "Are you the asshole who destroyed this city!?" the thug who with his colleague were the villains that started this mess...decided to play up to her. "y-yeah he did this and he was beating me up!" he screeched in fear as he brought out the crocodile tears. "ARE YOU STUPID OF COURSE I'M NOT THE VILLAIN HERE! I'M A HERO!" He roared his teeth and eyes becoming cartoonishly sharp...not really helping his case.

"Shut up you brat! Even if you weren't the villain, You still smashed up my bike..." Matoi raised her gloved hand, user her teeth she pulled a pin on her wrist. Suddenly this caused a transformation sequence to occur, changing her clothes from a normal school uniform into a mix between armour and lingerie. She finished this transformation by pulling out her scissor blade and pointing at the confused Bakugo...

"And that's why I'm gonna kick your preschool ass!"

"So you expect to beat me...by dressing as a stripper?"

This insult had already managed to make something snap in Ryuko somehow making her angrier than she already was. Senketsu noticed this through Ryuko's gritted teeth, "Ryuko keep calm..." he advised to his wearer. Ryuko huffed as she casually held her blade by placing it on the back of her neck.

"The more you run your mouth the more I'll enjoy beating your ass!" This threat made Bakugo smile a large toothy grin, he outstretched his hand and suddenly created a small explosion: Using it almost as a 'come at me' gesture. "Come over here and try it you bitch!" he said to throw salt on the wound.

While the two short tempered teens were giving each other a dagger-like glare, The Thug decided to pick up his injured self and hobbled away as quickly as possible. Not wanting to be in the middle of this fire work show...and to be honest I don't really blame him. Because this was going to get messy! 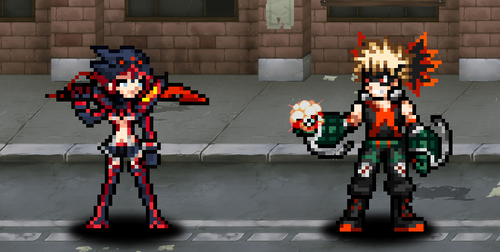 In less than a second, Ryuko went in to end the battle quickly by slashing at the left-side of Bakugo's neck. Dynamite was quick to react as he raised his bracier, blocking the attack and causing sparks to fly. Katsuki gritted his teeth as he pushed away Ryuko's blade, "DIE!" he yelled as he slammed his palm against Matoi's stomach. The force of the attack knocked her off her heels.

This would've hurt already but to put salt in the wound, Bakugo ignited an explosion directly into Ryuko's stomach. The force of this explosion was enough to send the fibre-teen flying like a rocket. Ryuko managed to regain her composure and landed a few feet away, stabbing her scissor blade into the concrete to stop her momentum. Ryuko looked forward only to find Bakugo running through the smoke.

"IT AIN'T DONE YET!" With this he put his arms behind him, Using the power of his explosions he propelled himself through the air in a manner similar to Iron Man.

"Shit!" Ryuko cursed to herself as she propelled for the rapidly approaching human-rocket named Katsuki Bakugo. Dynamite was the first to attack by throwing a explosive powered haymaker, The teen fighter in life-fibre reacted quickly by holding her blade above her head to act as a shield against Kaachan's attack.

However, that didn't stop Bakugo from continuing his offense. Continually peppering the Kamui wearer with explosive punches forcing her to go on the defensive using her sword as a shield. Each strike made her wrists rattle due to how hard she was hit.

With gritted teeth, Ryuko used her upper body strength to effectively push Bakugo off her blade. "EAT THIS!" Ryuko yelled as she swung her blade towards Bakugo's side. By turning her blade sideways she effectively created a baseball bat, which she used to smash straight into Bakugo's ribs crushing them upon impact.

Kaachan growled in pain as he was sent rolling across the floor. Before he could really recover he heard Ryuko yell alerting him to the fact that she was barreling towards him, ready to slash down on his head. Bakugo was barely able to react as he jumped away from the strike. Ryuko wasn't satisfied as she attempted to slash across Bakugo's face.

Dynamite was quick to enough to avoid the brunt of the attack...but he still was still cut by the blade. Causing a small nick in his cheek, blood sprayed from the small wound.

The wound to his pride was greater than the one on his face, Bakugo gritted his teeth in anger and grabbed hold of Ryuko's throat making her gag in pain. He span around to build up momentum before he then flung Matoi with everything he had, the proceeding explosion sent her zooming across the road.

Retrieved from "https://dbxfanon.fandom.com/wiki/Ryuko_Matoi_vs_Katsuki_Bakugo?oldid=190872"
Community content is available under CC-BY-SA unless otherwise noted.