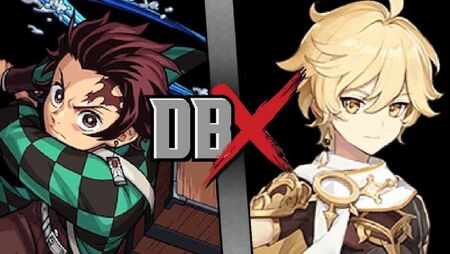 (This is my 49th battle) (This is the volume 4 premiere) (For Tanjiro's Water Breathing techniques, see the Demon Slayer Wiki)

Tanjiro stands on the edge of Mt. Aozang, looking at the view. Traveler approaches Tanjiro, who turns around towards him.

Tanjiro: What do you want from me?

Traveler points his sword towards him and says:

Traveler: You're pretty powerful, I want to challenge you in a duel.

Tanjiro then points to himself.

Traveler nods towards him.

Traveler: Which is why I want to challenge you.

Traveler: Great! Let's do this!

Both of them get ready to duel.

Both of them start off by clashing with their swords. As they clash, Tanjiro kicks Traveler away. He recovers, and blocks Tanjiro’s follow up attack. He then attempts slashing at Tanjiro, but misses as he jumps backwards. He then jumps up to Traveler and clashes with him in the air. He drops down and slashes at him again, but it also gets blocked. Traveler then thrusts his sword forwards, launching Tanjiro into the side of a tree. He looks up and blocks Traveler’s slash, and then pushes him off of him. Traveler lands on the ground and sees him run up to him. Tanjiro slashes at Traveler’s chest, and follows it up with a kick. Traveler recovers and spots Tanjiro running up to him again, in an attempt to follow it up. However, Traveler quickly uses Starfell Sword to hit Tanjiro into the air. He then swiftly climbs up it and slams Tanjiro into the ground.

He crouches on top of Tanjiro and punches him in the face. He raises his sword up and tries slashing him, but Tanjiro uses Sixth Style: Twisting Whirlpool at Traveler. Fortunately, for him, he dodges the attack by jumping backwards. The breathing technique destroys the Geo Construct created by Starfell Sword. Tanjiro gets up and charges towards Traveler. He tries slashing at him, but Traveler dodges it, and counter-attacks by launching Tanjiro away with a short Palm Vortex. Tanjiro falls on his back, but quickly gets up. They both stare at each other, before Tanjiro runs up to him, and uses Second Style: Water Wheel. Traveler blocks it, and pushes Tanjiro back. The both of them start slashing at each other, before Tanjiro kicks Traveler back. He recovers quickly and runs up to him. He manages to slash at Tanjiro’s chest, and then he trips him. He follows that up by uppercutting Tanjiro away.

He gets up and glares at Traveler, who launches Gust Surge towards him. Tanjiro quickly jumps to the side and lands on the ground. He uses First Style: Water Surface Slice and charges towards Traveler, who quickly dodges it by jumping upwards. He then bounces off of Tanjiro’s back, and plunges downwards, towards him. This hits Tanjiro, launching him away. He gets up and spots Traveler charging at him, so he blocks it with his sword. As they clash, Tanjiro manages to disarm him. He tries following it up with a powerful sword slash, but Traveler quickly uses Wake of Earth attempting to hit Tanjiro, but he jumps out of the way. Once he does that, Traveler quickly grabs his sword and charges directly towards Tanjiro. He manages to slash him in the chest, and then again. He finishes the combo by launching the demon slayer into the air with Starfell Sword.

Traveler quickly climbs the Geo Construct and jumps up to Tanjiro, who swiftly recovers in the air and blocks the attack. Tanjiro then slashes him downwards into the ground, breaking the Geo Construct. He falls down towards Traveler and uses Seventh Style: Piercing Rain Drop. Traveler quickly dodges it by rolling to the side. Tanjiro lands on the ground and runs up towards him. They both clash with their swords. During one of those clashes, Traveler launches him away with a short Palm Vortex, launching Tanjiro into the side of a tree. He recovers once launched and looks towards Traveler, who thrusts his sword at him. He quickly dodges the attack and slashes at Traveler’s chest. He tries headbutting him, but Traveler dodges it. He then tries counter-attacking by slashing at Tanjiro, but he quickly flips behind him. Traveler turns around, and the both of them start clashing with each other again. During one of the clashes, Traveler quickly kicks Tanjiro in the face and follows it up with a forward thrust. Tanjiro recovers, but gets hit towards Traveler with his Starfell Sword. He quickly follows it up by hitting Tanjiro into the air.

As Tanjiro is in the air, he suddenly uses Second Style: Water Wheel to not only safely land on the ground, but also target the traveler. He notices it, so he hastily jumps out of the way and attempts counter-attacking by slashing at Tanjiro. However, Tanjiro quickly blocks Traveler’s sword, and they both clash for a second. They pull their swords back and start slashing at each other multiple times, with Traveler sprinkling in a few kicks in. He suddenly pushes Tanjiro away with Palm Vortex, and stares towards him. Tanjiro recovers quickly, and the two of them clash once more. During that clash, Tanjiro screams out and powerfully hits Traveler in the head with his signature headbutt.

The impact makes Traveler stagger back, with his forehead bleeding. Tanjiro slashes at him, and he tries blocking it with his sword, but this just disarms him. Tanjiro then kicks Traveler far away. He gets up and looks towards Tanjiro. He charges up Third Style: Dance of the Rapid Current and runs towards Traveler. In an attempt to stop him, Traveler launches Wake of Earth towards Tanjiro. However, he simply lands and jumps off one of the spikes, directly towards Traveler. He swiftly slices through the air, before reaching him, where he slashes through Traveler. This cuts Traveler’s left arm off.

He crouches down on the ground, wincing in pain. Tanjiro stands up and looks back, seeing Traveler’s cut off limb. He suddenly realizes what he did and starts to panic.

Traveler looks back, but instead of being angry, he smiles.

Tanjiro: Wow, um… You too! Your battle technique is great!

Traveler: Thanks! I need to get going now.

Tanjiro: Yeah me too… See you soon!

He waves towards him and starts walking away.

Tanjiro walks down the mountain, and Traveler walks towards the edge of the battlefield. He stares into the sky.

Traveler: I’m going to need to get stronger, if I want to find you sister...

THE WINNER IS TANJIRO KAMADO!!

Retrieved from "https://dbxfanon.fandom.com/wiki/Tanjiro_vs_Traveler?oldid=191442"
Community content is available under CC-BY-SA unless otherwise noted.