Tsuyu Asui vs King Wart is a DBX made by JohnGojira. It is the 5th episode in JohnGojira's Season 1.

Tsuyu's little brother and little sister are kidnapped by the villainous King Wart, who has taken them to the dream world Subcon. Can she defeat this toad enemy and save her siblings?

The students of Class 1-A were allowed to visit their homes for a brief point in time, and so that meant, of course, Tsuyu was able to see her family. Tsuyu found that they had been able to do quite well, as her little brother, Samidare, and her little sister, Satsuki, stepped up to do chores.

Tsuyu was quite happy to see that they were doing so well.

While Tsuyu was talking to her parents in the Kitchen, her little brother and sister found a strange book on the bookcase in the living room.

Samidare: Never knew we had this.

Samidare opened the book at about the middle, wanting to skim to get a sense of what the book was...

Suddenly, a purple, swirling portal formed in the pages. From out of the portal, a large, green, clawed hand reached forward, snatching the two kids.

Tsuyu heard the screams from the kitchen.

Tsuyu: Ribbit? I better help them.

Her parents nodded. Tsuyu rushed in to find her siblings being pulled into a book with a portal in the center.

Tsuyu quickly got into her hero outfit. The portal in the book was beginning to close. Tsuyu leapt in just as the portal closed...

Tsuyu emerged on the other side to find a strange castle which seemed to be nowhere on Earth.

Tsuyu: Ribbit, where am I?

She knew that her little brother and little sister must be here, so she jumped across the brick floors and into the strange castle.

Tsuyu walked through the dark, torch lit castle. It seemed strangely human, even though this was a castle that was in another world entirely.

Tsuyu: Who could be the owner of this castle?

Tsuyu spied a room at thee end of the hall area. From a distance, she could here calls for help. They sounded like Samidare and Satsuki.

Tsuyu switched to a hop in order to quickly get to the room. However, she made sure to be wary, for whoever was the captor of her little brother and little sister might still be present.

Tsuyu emerged into the room. It was definitely a throne. She quickly saw Samidare and Satsuki, who were in a cage suspended from the ceiling.

Just then, Tsuyu noticed a shadow formed above her. She quickly leapt out of the way as the caster of this shadow landed in front of her.

There stood a large, portly toad, who had a glare on his face. His attire was a crown on his head and a purple robe, with a medal around his neck.

Tsuyu: Who are you?

King Wart: I am the mighty King Wart! Ba ha ha ha! And who are you?

Tsuyu: I am Tsuyu Asui! Training o be a pro hero and I am here to save my siblings!

Wart shot out a stream of bubbles from his mouth. Tsuyu leapt out of the way of the bubbles clinging to the walls around her. Tsuyu used her tongue to grab the ceiling, swinging at Wart and landing a kick to the toad king's face.

Tsuyu leapt off of King Wart's face, but Wart sent out his toungue, and caught Froppy by the leg, which caused her to fall onto the ground.

He leapt at Tsuyu. Tsuyu saw this and leapt aside. Wart crashed onto the floor when he landed. He turned, and spewed a stream of water at Tsuyu. Tsuyu jumped out of the way, and dashed around Wart. Wart sent out more bubbles, which drifted around.

King Wart: Wooaaaah. You're making me dizzy. So you like speed? Well I'll give you speed!

He snapped his fingers, and a magic carpet glided through the air and to his feet. He hopped on, and flew after Tsuyu.

Tsuyu heard the air current as Wart zoomed towards her. She turned her head as she hopped.

Tsuyu: Ribbit. He is really gaining.

Tsuyu quickly stopped, and then leapt to the ceiling as Wart's clawed hand swiped across her former position, and he flew past it.

Tsuyu leapt to the wall, and shot her tongue at King Wart as he flew at her. It wrapped around the toad's body, and she propelled herself at Wart, landing a kick to his gut.

Wart was stopped in place, but recovered.

As Tsuyu leapt on the wall from the ground, King Wart watched. He closed his eyes, and shifted his hand.

The castle walls begand to tremble and shake, crackling as bricks shifted against bricks. A cluster suddenly jutted out, and slammed into Tsuyu.

Froppy was sent in a diagonal launch. King Wart shot off a bubble, which trapped Tsuyu in it. She drifted in the bubble to Wart's large hand. The bubble popped, and Wart held Tsuyu in his hand. Tsuyu squirmed, but he held tightly.

King Wart: Seems you're out of tricks.

Tsuyu looked up at Wart.

Tsuyu then secreted a mucus onto Wart's hands. The toad noticed his hands begin to itch in irritation. He shouted out, and let go of Froppy.

The wall which had been distorted, had exposed an area filled with crates and barrels. Tsuyu did not waste time. She snatched a crate in her tongue, and flung it at King Wart. It smashed on the King of the 8 Bit Club.

King Wart: Ba ha ha! Did you really think that would stop me?

But then he looked down, and noticed the original contents of the crate, which was now spilled around him. A look of fear crossed his eyes.

She noticed that he seemed to dislike the vegetables. So, she could use those. She grabbed a vegetable from inside the crate and hurled it at Wart. It his him in the stomach.

King Wart: No! No! I hate vegetabes!

Tsuyu hurled another, but Wart was ready for this one. He shot out a bubble at it, causing it to disappear a small plume of smoke.

Wart then picked up a piece of wood which had been displaced, and an aura formed around it. He switched it out for a bobomb. The bobomb hissed and flashed red and he threw it towards Tsuyu.

Tsuyu leapt out of the way as it detonated, but the explosion obscured vision. When it parted, Tsuyu was nowhere to be seen.

Samidaree and Satsuki, who were still in the cage, were scared.

But just then, near the crates and barrels, there was a rippling disturbance in the air.

Tsuyu emerged from her camoflauge.

King Wart shouted in anger. He condensed a collection of water in his mouth, and sprayed it at Tsuyu. However, Tsuyu leapt up to the ceiling, an the water struck the rafters with the crates and barrels.

Then, theree was a rumbling, and a wave of vegetables was released from their containment, rushing towards Wart.

Tsuyu watched from the ceiling as what happened went as planned. She jumped to her siblings, and freed them from their cages. The castle began to rumble, and a portal formed in the wall. Tsuyu leapt through with her siblings...

When Tsuyu met back with Class 1-A, she told them of the craziest dream she had, but then she figured that it was not a dream at all... 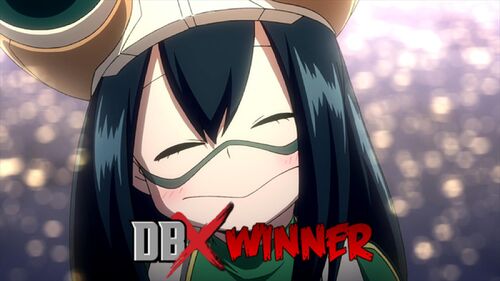 The slayer of the titans...

faces against the Evil Atlantean God...

It's a battle of two titanic tentacled terrors in...

The Kraken vs Irys!

Retrieved from "https://dbxfanon.fandom.com/wiki/Tsuyu_Asui_vs_King_Wart?oldid=178275"
Community content is available under CC-BY-SA unless otherwise noted.